Key Players Behind the Creation of 50 Fifty DTC

In 2018, we unveiled 50 Fifty, the beginning of a new era in workplace design in the Denver Tech Center. This 400,000-square-foot, 12-story tower is our largest project to date, offering a design-forward solution to the outdated modus operandi of office park building design.

The project has won a slew of awards and media spotlights, including the recent announcement of Clutch’s first 2020 American Institute of Architecture, Western Mountain Region Design Excellence Award.

Thoughtful design has never originated from just one person. In the case of 50 Fifty, an artful concept was executed via multiple teams who poured their hearts into the same end goal.

With all of the accolades the project has received, the Clutch team has decided to turn the tables and applaud a few of those companies who worked tirelessly in the background to bring the vision of 50 Fifty to life. 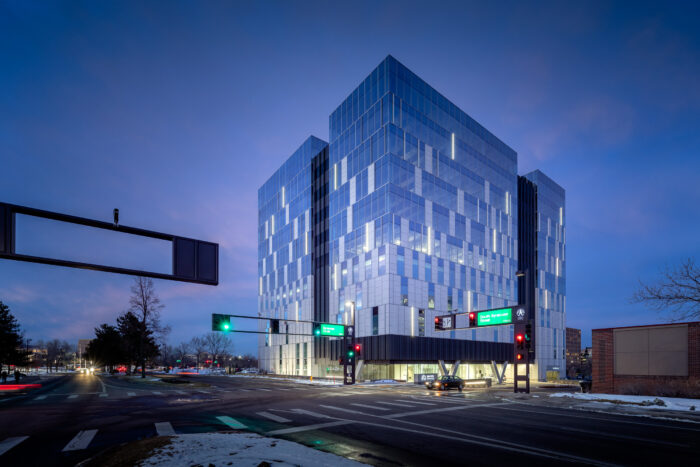 Headquartered in Colorado since the 1940s, Martin/Martin, Inc. is a full-service civil and structural consulting engineering firm that has cultivated a reputation built on experience and leadership. Their staff of engineers boasts memberships within renowned organizations such as Engineers Without Borders, The Urban Land Institute and The American Society of Engineers. With such skilled personnel, Martin/Martin tackles a wide variety of projects, including the aviation, residential, mixed-use and industrial sectors. We selected them because of their culture of creativity and integrity, and they delivered nothing short of what was promised.

Our favorite aspect of 50 Fifty: “50 Fifty’s V-columns near the front entrance are a unique twist on the typical vertical building column. The V-columns express both form and function, providing an architectural statement and carrying the loads from the entire south-west corner of the building. A massive plate girder hidden behind the façade at parking level 2 carries the load from the twelve upper levels to the V-columns, which in turn carry the load to the foundation.” – Michelle Black, Project Manager

The curtain wall not only contributes to the energy performance for the entire building, but the face of the building itself—a first impression and, ultimately, a client’s brand. That type of responsibility is built on a foundation of immense trust, a reputation earned by Harmon’s accomplished, local teams. Combining collaboration with a genuine work ethic—not to mention six decades in the industry—Harmon continually offers stylish solutions motivated by a desire to do things better than what has been done before. Their work on the 50 Fifty curtain wall was nothing short of incredible, and we wouldn’t have achieved such an innovative facade without their ingenuity and ability to translate the vision into reality.

Our favorite aspect of 50 Fifty: “The building is unique due to the mix of exterior and high grade finishes utilized in the façade design and the offset vertical mullions. There is a great dynamic and flow between the VRE1-46 glass, Sierra White Granite, Black ACM panels, and the two different aluminum finishes. The success of the building was really born out of an environment of collaboration amongst the design partners.” – Jacob Johnson, Operations Manager 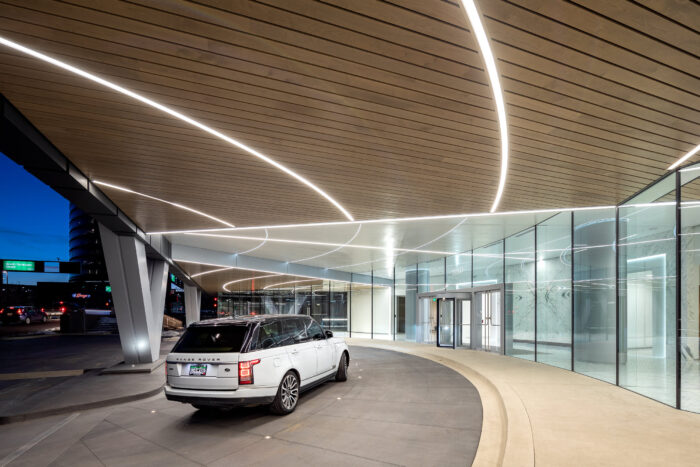 Hunt Electric has been offering in-house single-source solutions for over 30 years. Headquartered in Salt Lake City, UT—with branches in St. George, UT and Littleton, CO—Hunt Electric is consistently growing and employs, on average, a workforce of 550+. Their offices boast full prefabrication shops where their teams make and assemble products off-site, which ensures Hunt Electric more control over the quality, safety, cost and on-time delivery of their projects. Hunt’s contribution to 50 Fifty was vast, but their innovation really shines at night through the LED-lit fins on the exterior and the interior light wells, creating a memorable and exciting exterior unlike anything else in the Denver Tech Center.

Our favorite aspect of 50 Fifty: “We focused on collaboration from the start. The teamwork associated with this project has led to a solid foundation of relationships based around a project that we can all say that we accomplished together.

A concept without countless hours of hard work and collaborative problem solving is bound to remain just that: an idea. With the design of “people-first” office space at the core of the project, 50 Fifty was the result of exceptional collaboration between teams that were passionate about bringing this unique vision to life. Today, there are twelve stories of visionary brilliance that serve as a standing ovation to everyone responsible for the construction and design of 50 Fifty.